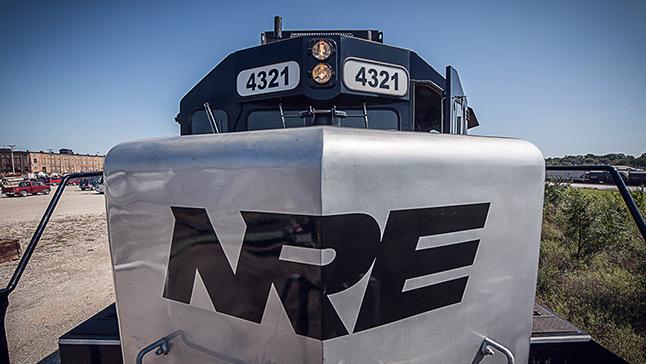 Challenges facing Class 1 railroads are moving more freight for less money; ensuring on-time, reliable service; and moving toward more environmentally friendly operations. To address these issues, railroads can purchase new locomotives, which offer lower emissions and more power. But the cost of acquisition is high, and many of the newest locomotive models actually provide more power than many freight haulers need.

NRE offers a better solution for both the environment and a railroad’s bottom line through its Independent Axle Control (IAC) system. This easily applied, tailorable retrofit can give an existing locomotive fleet the top technology, reduced emissions and power performance of the newest locomotive models, all with a minimal investment and a short ROI. Since many of the best candidates for IAC retrofit are locomotives that are 25 to 30 years old and due for rebuild, a railroad opting for IAC can essentially turn its existing, aging fleet into a brand-new, state-of-the-art fleet that can compete and even surpass the newest locomotive models for power and efficiency.

As opposed to equipping AC Traction systems, IAC is minimally invasive. Locomotives are outfitted with a new microprocessor control system and new IAC motor controllers (“choppers”) on each axle. Railroads opting for NRE’s IAC retrofit can retain, refurbish or replace all other equipment as they wish, including cabins, consoles, high-voltage cabinets, excitation control hardware and existing traction motors. But these additional upgrades are optional; for the IAC system to work, all that NRE needs to install is the microprocessor control system and the choppers. Even wheel diameters don’t have to be precisely matched. Everything behind the electrical cabinet remains the same, and “bolt on” packages are possible with many locomotive types. 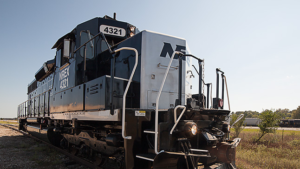 NREX 4321 featuring the IAC on the NRE test track in Silvis, Illinois.

So how does it work? Simply put, with the IAC system, power in = power out. The choppers constantly manage the current supplied by the generator to the motors. Hundreds of times per second, the choppers switch on — connecting the generator directly to the motor — and switch off — allowing current to flow through the motor. When a wheel slips, the IAC system instantaneously cuts power to the slipping wheel while simultaneously boosting power to the other wheels so that there is no horsepower or speed loss. Wheel creep and rail adhesion is optimized for each axle, without the need of traction motor speed probes. IAC-equipped locomotives offer higher performance due to higher adhesion.

The tractive effort of an IAC-fitted locomotive surpasses all conventional DC locomotives, with adhesion capabilities approaching the latest AC traction locomotives and surpassing all conventional DC locomotives. This makes IAC technology especially effective in low-speed service, since tractive effort is higher at starting speeds. With more work being done more quickly and with less power, railroads may be able to reduce the number of units in use with IAC technology — doing more with less. And IAC provides individual traction motor cut-out — if one motor fails, locomotives retain more than 83 percent of tractive effort at 100 percent horsepower, so there’s no difference in performance.

Superior rail adhesion is only part of the IAC story. With conventional DC traction technology, the generator is connected directly to the traction motors. As locomotives go into motion, they’re pulling thousands of amps out of the generator, losing a large amount of energy to heat loss, and burning fuel without actually getting any work done; generators are only working efficiently at speeds of 50 mph or faster. The IAC system operates at minimal generator current at all times. At low speed, IAC generator current only goes up to horsepower, meaning that at starting speeds only a few hundred amps are being pulled from the generator. An IAC-equipped locomotive only pulls full current from the generator when operating at full horsepower. With IAC efficiency improvement, more power is delivered to the rail, decreasing fuel burn over conventional DC locomotives at speeds up to 60 mph — at nearly all speeds below 60 mph, IAC technology is more efficient than any conventional DC traction locomotive.

IAC technology provides lower fuel consumption and higher productivity with your existing assets. NRE can give your locomotive fleet not only a new lease on life, but also top technology for tomorrow.